A Letter to the Editor

We Spanish have done our part to become an interesting country -perhaps we deserve to have a good New York Times correspondent.
Por Daniel Gascón
AÑADIR A FAVORITOS

You edit a great city newspaper, through your correspondents many people learn what happens in other places. You might say, “That’s their problem”. We both know this trade, we can speak freely. But international coverage is one of the appeals in your newspaper. And Spanish coverage leaves much to be desired.

If your paper’s motto is “all the news that’s fit to print”, its Spanish coverage contains “all the Franco that’s fit to print”. A few days ago your correspondent managed to slip in a reference to the dictator, who died 45 years ago, in an article about the coronavirus pandemic. Franco’s name appeared 5 times in an article about The Prado Museum (Velázquez once, Goya none). If possible, Franco’s name will be in the headline of any article, but it can also appear in a modest parenthesis of the soprano Montserrat Caballe’s obituary: she “expressed equal pride in her Catalan and Spanish backgrounds [a distinction without a difference, in a charitable interpretation]. She was also circumspect about whether her family had been Republicans, supporting Spain’s democratically elected government, or Nationalists, supporting the military dictator Francisco Franco”. Your correspondent might have added that a Catalan cultural minister told Caballé that her only fault had been to marry “a foreigner”, by which he meant the Aragonese operatic tenor Bernabé Marti.

The article about the coronavirus outbreak reads, “some regional governments that have long bristled at Madrid’s interference in their affairs”. The central government’s “interference” in “their” affairs -your paper endorses this assumption. It shouldn’t be a surprise: The New York Times would mention the illegal 2017 independence referendum as “referendum”. A headline read: “Spain will remove Catalan leader, scaling secession crisis”, as if the police escalated a robbery by stopping it. Your correspondent wrote, “Madrid has already used the stick to force Catalan media into line” -no less. It can be hard to discern if you don’t know the context; one by one, many of these elements can seem justified. But their effect is a systematic bias. Pro-constitutionalist visions are associated to the extreme right, and Francoist folklore is used at the slightest opportunity. I understand it’s the easiest way, and we all are in a hurry, but the impression it gives is mostly intellectual laziness.

This is understandable to a certain extent. Spain is a relatively calm country, and it’s not easy to attract good journalists here, they’ll probably prefer more exciting places. But other foreign newspapers have managed this, and I beg you to acknowledge our efforts as a country. In a few years we’ve gone through an economic crisis, a major reconfiguration in our party system, a constitutional crisis and now an epidemic combined with troubles for the crown. We’ve done our part to become an interesting country -perhaps we deserve to have a good correspondent. 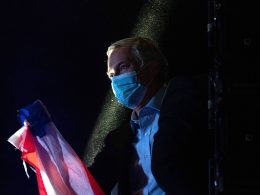